I haven't really had an update on Aiden in a while but this weekend a video popped up on my timehop (an app that will show you what you post on Instagram and Facebook one year ago that day). It was Aiden trying really hard to say the word "momma". It really made me realize how far he has come in just one year. He has made so much progress it is really unbelievable and I contribute his progress to early intervention. Last year he was just learning to walk and had a vocabulary of just a couple of words. He  was receiving PT once a week, OT once a week and speech twice a week. His only form of communication was mostly through signs. We had a lot of frustrations due to his inability to communicate what he wanted. Most days were rough and ended in meltdowns (both me and him). 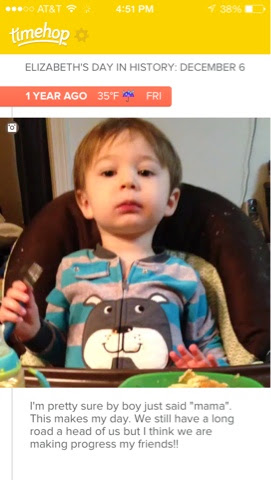 Today Aiden is almost three years old. He has been discharged from PT and just had his last OT session last week. He can run, jump, walk and climb.  He has a large vocabulary (so large I haven't been keeping count). He can tell you what he wants and what he doesn't want. He can ask questions and carry on a conversation. He can name his friends and family members and tell you want he did at school that day. He can even count to 10 and name his colors.
Having Ms. Becca (his OT) leave Tuesday was bitter sweet. I'm  so glad that he has met his goals but really sad we won't see her anymore. She's been in our home once a week for almost two years. She was someone who I trusted and could talk to and lean on to answer questions not only for aiden but also for Ava.
In a couple of weeks (when he turns three) Aiden will be aging out of first steps which means he will no longer receive services in our home and will have to get private speech therapy. This will be very hard on me and him.  He receives speech therapy twice a week so Mrs. Ann is with us a lot.  I've had people say "oh but won't you enjoy not having someone in your house three times a week" but the truth is therapy has become such the norm for us. It's a lot but it's something I've grown used to. I like having somone to ask questions to and who will give me things to work on. I'm really worried once we don't receive home services anymore I won't work as hard with him.
One thing I'm excited about is his exit evaluation. I'm anxious to see where he is compared to other kids his age. Ms. Ann thinks he may not need speech beyond the age of three so we will see. Prayers for good results and that he corporates that day. It's long and he sometimes gets frustrated and gives up which doesn't give accurate results.
Until then we will keep pushing along! I'll update everyone when I get his results!
Posted by beachbumbride at 8:43 PM