It's a christmas miracle!!

Last week Aiden had his exit evaluation from first steps. At three years we can no longer access services through first steps and would need to set up private therapy if it was needed.

I really didn’t know what to expect. I knew he had made a ton of progress but I just wasn’t sure how he would do during the eval with someone he didn’t know. Well it turns out he isn’t shy and mastered everything she asked him to do. She was blown away at the progress he had made in 22 months. As it turns out Aiden met right at cut off in most areas which means he is doing things right along beside peers his own age. This made me so happy to see. When he started at 14 months his scores were in the negatives. He wasn’t doing things his peers were able to do. He wasn’t able to walk or talk. He couldn’t string beads or hold a crayon. He had absolutely no form of communication other then crying and grunting. It was very frustrating for all parties involved. We were told multiple diagnoses that turned out to be wrong. We were told he may never walk or talk and wouldn’t be star athlete. (Aiden proved them wrong!!)

I was determined to not take no for an answer. He began PT, OT and speech 3-4 days a week.  I went part time at my job so that I could assure he got the services he needed. He worked so hard. We all worked so hard. Our family and sitter were amazing through this entire process and we couldn’t have done it without them. Now everyday wasn’t easy. Most days weren’t easy. There were a lot of tears and a lot of struggles at first. He went through three speech therapists and two physical therapists.

Early intervention is KEY and I am so proud of myself for noticing that he wasn’t meeting the milestones I thought he should even though our pediatrician kept saying “every kid develops at a different age”.

On Monday, his speech therapist called me in tears. I started to get really worried. Then the best news EVER came out of her mouth. She was so happy she was crying. She told me she had completed his speech eval last week at school and wanted to review the results with me.  She explained to me the test she gave him and that once he got 5 questions wrong that is where she has to stop and that tells her where he is with expressive and receptive language. She said that in 7 years she had not had a kid go as far as Aiden did on this test at his age. He scored 3 years 6 months for expressive and 3 years 9 months for receptive. I couldn’t believe he scored above age level. I was so happy and proud of him. Come to find out he wouldn’t even qualify for services anymore. He meets goal!! So Sunday was his last therapy session. It was bitter sweet. We LOVE his speech therapist and we were a little sad we weren’t going to see her a couple times a week. Good thing she lives down the street from my mom HAHA!

Aiden can now run, walk, jump and climb. He can color and string beads. He can throw a ball and catch a ball. He can sing and dance and carry on a conversation with you. He is using three and some four word phrases. He can tell me what he wants Santa to bring him and what he wants to eat for dinner. He has an amazing imagination.  He can dress himself and brush his own teeth. The sky is the limit and we will continue to push and work hard.

So I write this not only to update my family and friends on Aiden’s progress but to also encourage others to not be afraid of therapy. There is such a stigma about therapy and I just hate that. I truly believe in early intervention and feel Aiden would not be where he is today without the services we received. 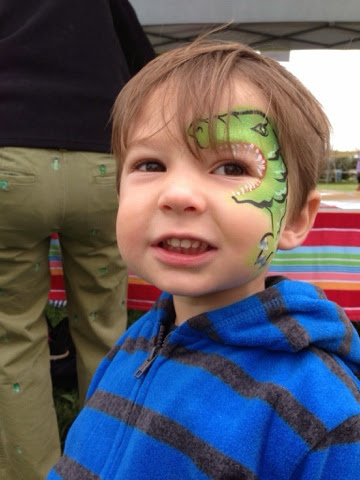 I love you to the moon and back Aiden!! Mommy and daddy are so proud of you!!

Posted by beachbumbride at 7:54 AM